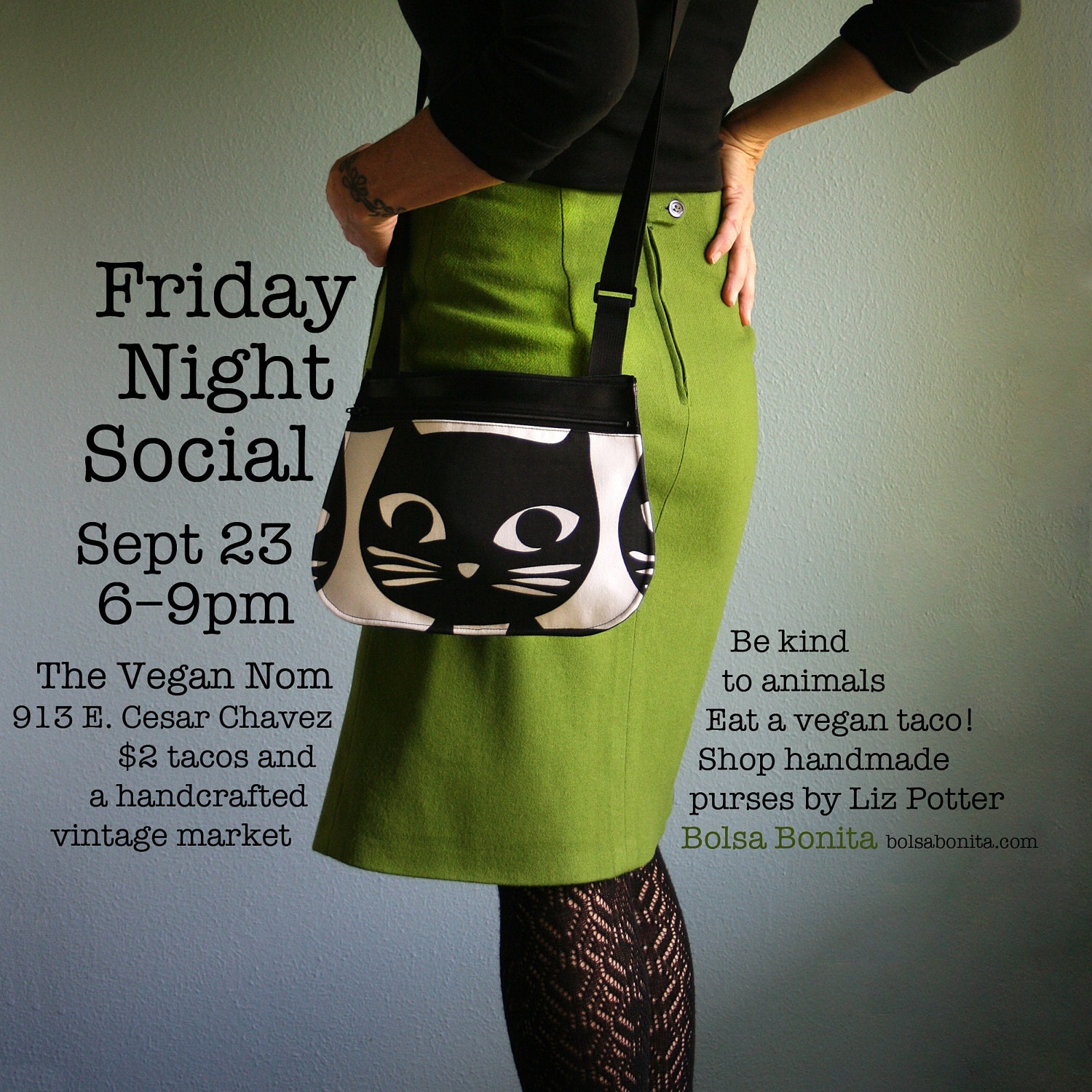 First of all, let me promote an event I'm doing Friday- a small gathering of local vendors at one of my favorite food trucks in Austin, The Vegan Nom. Now, if you're not vegan, do not fret- these tacos are not made from dirt and dried leaves, they're just made with veggies and plant-sourced foods... and they're SO GOOD! Great, actually. Some of my favorite food in all of Austin. Plus, they have a $2 taco special! And there's a little market of goodies to occupy your wait time! I'll be there with a selection of bags (mainly crossbody, some clutches, and wristlets). Vegan Nom is 314 E. Cesar Chavez. The event is 6-9pm

So today is my Meals on Wheels delivery day. I have a new client who I'm kind of in love with. Oscar. I met him last week and he came to the door wearing what looked like a soccer uniform. A spry old man. I introduced myself and let him know I'd be seeing him on Wednesdays.

Today he opened his door and said, "Hi Liz!"-- I said, "You have a great memory!" and he laughed and said he looked at his sheet. I told him I didn't realize they gave out who the drivers were and he said, "Oh no, I just made a note last time you were here".  I already love this guy. He has that sparkle in his eye that makes me know he's old, but he's not old. You know what I'm saying.

There's another client who I've known for the past 6 years of doing MOW- Charlene. The majority of the time a younger man answers the door. I never knew if it was a caregiver, or a son, or... who knows! It took 3 years before he said anything other than, "hi" and "thank you" to me before quickly shutting the door. One day I was wearing my "Caturday" t-shirt and he said, "I LOVE your t-shirt!" I was stunned. He had never spoken so many words to me! I tried to crack him a little after that incident, tried to engage him a little more. He's kind of flighty, like he's not really interested in chit chatting too much. That's fine. In the past few years he's started to compliment my dresses or say I look nice. Not in a creepy way, just being polite.

Last week Charlene came to the door. Charlene is the sweetest woman ever. She always looks so glamourous when I see her, with full make up on, a nice outfit, and jewelry, but when I ask, "How are you doing?" she says, with a smile that I'm sure is plastered on her face all the time, "Not very well". It breaks my heart. She's probably in pain of some sort. Last week I decided to ask about the guy, "Is that man your son?" and she said, with a smile of course, "Yes.. he's my son, my bachelor son!". oh no! Cool it, Charlene! Just curious!

Today he said I looked really nice. I had a sundress on (because it's infuriatingly hot in Austin). ha ha! Hope his mom isn't trying to do any cupid activity on our behalf!

If you're in the Austin area and have any time to give, I highly recommend signing up for Meals on Wheels. They're in desperate need of drivers. It's quick and easy and the characters you will meet make it all worth it. It's a weekly "life lesson" of sorts because it pulls you out of your daily life and gives you a glimpse into other people's lives- often lives that you will be happy are not yours, giving you a chance for practicing gratitude. It's also fun to meet some of the people, even if they're a little crazy or grouchy! Or trying to hook you up with their son!